Can Scientists Build a Machine that Can Regulate Itself with No Maintenance 4 Billion Years?

Can scientists build a machine that can regulate itself without maintenance for four billion years? Well, the earth regulates itself with feedback mechanisms to keep temperatures between the boiling and freezing point of water. And it has been doing it for a very long time. It is strange how they insist this was all from chance when they can't do anywhere near that well even on purpose! 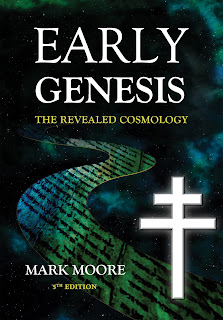 You Tube Channel
Posted by Mark Moore (Moderator) at 7:26 PM No comments:

The Son of THE Man. What they are not telling you about the main title Jesus gave Himself


Posted by Mark Moore (Moderator) at 3:55 PM No comments:

Will Many Be Saved? What Early Genesis can say About the End of Revelation


Posted by Mark Moore (Moderator) at 3:05 PM No comments:

The "Us" in Genesis 1:26 is the Trinity, Not a Divine Council


Posted by Mark Moore (Moderator) at 2:17 PM No comments:

It All Happened So Fast: Evolution Beyond Nature Again

I can't keep up with all the new reports coming out that would indicate to an open mind that whatever "evolution" occurred on this earth, a Divine Hand was doing all but the most mundane aspects of it.

I've already written about how the Great Ordovician Diversification Event rivals the Cambrian Explosion as a problem for philosophical naturalists. There is too much directional change in too little time compared to what the known naturalistic mechanisms we see are able to produce. A few weeks ago I reported on the dizzying speed which occurred in the divergence of reptiles. Just two weeks ago I linked to a report on a study marveling at how quick the leap was between jawed and jawless fishes.

They showed a brave face in the article, labeling the new find "the oldest jawed human ancestor", but the evidence compelled them to say things hinting as the unnatural speed at which these changes occurred.

These findings present tangible evidence of a diversification of major vertebrate groups tens of millions of years before the beginning of the so called "Age of Fishes" some 420 million years ago.......

"The new discovery puts into question existing models of vertebrate evolution by significantly condensing the timeframe for the emergence of jawed fish from their closest jawless ancestors. This will have profound impact on how we assess evolutionary rates in early vertebrates and the relationship between morphological and molecular change in these groups," said Dr. Ivan J. Sansom from the University of Birmingham.

Just don't question the naturalistic premises Dr. Sansom. You would not want to lose your funding.

You Tube Channel
Posted by Mark Moore (Moderator) at 6:56 PM No comments:

The "Sudden Leap" Between Jawless and Jawed Fishes

"Evolution is often thought of as a series of small steps, but these ancient fossils suggest there was a larger leap between jawless and jawed vertebrates. These fish literally have their hearts in their mouths and under their gills—just like sharks today."

I guess there was "a whole lot of evoluting going on" in very brief period of time. Since then we have variations on a theme.

How many times must the pattern be found before scientists begin to consider the idea that nature wasn't the driver here, but the tool?

Posted by Mark Moore (Moderator) at 6:23 PM No comments:

Early Tetrapods Had Different Skulls than Fish they Evolved From?

You would expect the earliest tetrapods (four-footed land animals) to have skulls configured like those of the early fish that they purportedly evovled f (actually I think it is more helpful in describing the record if we separate the question of "did they evolve" from "is nature alone a reasonable explanation") rom, right? And if somehow the changes that made them a tetrapod also happened to have effected their skulls, you would still probably think "this just came with the change program, once they get on land evolution will  act to produce variations until it hits on winning formulas."

Those are reasonable assumptions, but as is so often the case, it isn't what the evidence shows. Indeed this article describes a study where the researchers claim that the first tetrapod skulls were indeed very different from their supposed immediate ancestors. Further, these changes somehow "limited evolution" because of the lack of diversification of these skulls for a long time. Frogs still had skulls much like those early tetrapods!

The actual record is that when major new forms emerge, they tend to do so suddenly and then go ten million years or more without substantial speciation- as if they somehow "nature" got it right the first time and no further changes were improvements for a long time. Somehow, they hit the "big middle". Only later is there a sudden burst of speciation. Sometimes in different phyla all at once. See here for more.

The record of nature may support "evolution", but it doesn't support naturalism.

Can defenders of naturalism generate "just-so stories" to explain away the record? Sure, they are limited only by the power of human imagination. But that's not science. It is a manifestation of a belief system.

*******
My book isn't about this, but something much better. It is about how early Genesis points to Christ. Obviously, this could not be so unless He really was who inspired scripure says that He is.

Posted by Mark Moore (Moderator) at 6:31 PM No comments:

A blog dedicated to issues which relate to the book by the same name.